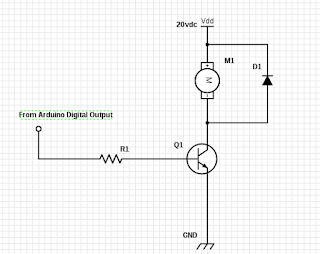 Many times, an Arduino, or other microcontroller, is not able to drive a load directly. We commonly will use a transistor to drive the load, and trigger it with a microcontroller’s output pin.

Lets use an example. Say we have a 20v dc motor, that requires 500ma of current at load.

Being a NPN transistor, the load attaches between the collector and the positive supply, the emitter connects to a common ground with the Arduino.

If we assume a Arduino HIGH being around 4.5v, and the diode voltage of the transistor is 0.7v, we get a base voltage of 3.8v. The maximum size of the resistor to maintain a 500ma load will be 228 Ohms. We found this by taking the needed base current of 16ma and dividing by the base voltage of 3.8v (and multiplying by 1000). If you go higher, the transistor may not fully open, and the motor won’t perform properly. We could go as low at 100 Ohms without exceeding the max current of the Arduino pin (3.8v / 100 Ohms = 38ma), but there’s no need to draw the excess current, so keep the resistor value near the max of 228 Ohms to reduce Arduino power consumption, and leave capacity on other pins. The total current supply capability of the UNO is 200ma (per ground) across all the pins.

Once the transistor reaches saturation, the base current and collector current no longer have a relationship.