You are here: Home / Tutorials

Enroll in Academy for Arduino and start learning today for FREE! 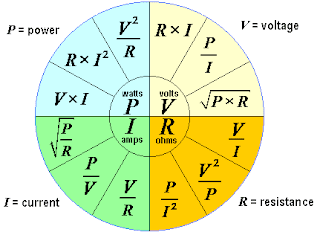 Ohm’s Law –
The basis for all electronics and electrical calculations is Ohm’s Law (I=V/R). If you remember this, you can figure out what size resistor to pair with an LED, how to control the speed of a motor, how to build a power supply, and more. It’s that important. There are three main variables in electricity, (I) current (amps), (V) voltage (volts) and (R) resistance (ohms). There’s also a 4th element, (P) power (watts). Ohm’s Law says that if you know two variables, you can calculate the third. – Online Calculator

Power vs. Energy –
DC Watts = volts * amps is important, especially in solar and battery calculations, and the time element, hours, is critical. A motor that draws 5 amps, is drawing 5 amps (power) as we speak. In one hour, it will have consumed 5 amp hours (ah)(energy), in two hours it will have consumed 10 ah. When multiplied by the voltage we get watt hours (wh). This (wh) is called Energy. Energy is what you get billed for by the Power company (kWh). Watts without time is called Power. Many people get this confused, and some websites deliberately muddy the waters to make their products sound better. If you see things like amps per hour, or watts per day, run away.

Not to confuse things too much, but in Alternating Current (AC), it’s not quite this easy. It starts out the same, Watts = Volts * Amps, but we also have to divide the Power Factor. A resistive load, like a heater, has a power factor of 1, so 1200w / 120v = 10a / 1 = 10a is the same as the DC calculation. But a electric motor, computer or fluorescent light may have a power factor of .5, so 1200w / 120v = 10a / .5 = 20a. That’s a much higher load, so wires and generating capacity have to be increased. We often use VA for some calculations instead of watts. You’ll see transformers rated in VA, as the load power factor isn’t known by the manufacturer.

Wire Sizing Calculator – Enter the voltage, number of amps, and the distance you need to run, experiment with different wire sizes until you get a 3% or less voltage drop. It’s at the bottom of the page