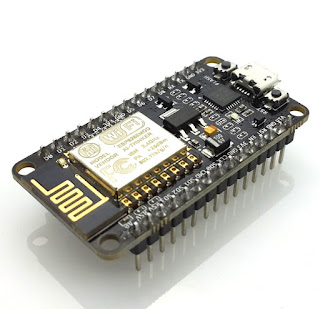 If you are looking for Wifi for for your Arduino Project, look no further! For less than $9 you can add wifi capability to your Arduino Project, without loading down your Arduino with a bunch of network access code. We used a HiLetgo New Version NodeMCU LUA WiFi Internet ESP8266 Development Board for the access link. Now this board has a bunch of 3.3v I/O capability all on it’s own, and is easily programmed using the Arduino IDE, but our goal is to use a Arduino NANO for I/O and just use the ESP8266 for the network link.

Installation was not straightforward, but not difficult either. The board uses a standard USB A-Male to Micro B cable used with most cell phones. Plug the cable into the ESP8266 and your computer. If you are on Windows, check your device manager to see what port has been connected. If you have a yellow exclamation mark on the device (Silicon Labs CP210x), right click it and choose Update Driver Software.

Now open a recent version of the Arduino IDE (1.6.4 or greater). Under File – Preferences, add http://arduino.esp8266.com/stable/package_esp8266com_index.json to the Additional Boards Manager URLs field, and click OK.

Now go to Tools – Board – Boards Manager and scroll down to ESP8266. Select ESP8266 and click Install.

Now to use the board, Go to Tools – Board, and select the Adafruit HUZZAH ESP8266. Others may work better, but that’s the one I started with.

Remember, this board uses 3.3v logic, so no 5v connections to the I/O pins.

The sample sketch I tried worked first time, and connected to the web server right away. See https://learn.adafruit.com/adafruit-huzzah-esp8266-breakout/using-arduino-ide for code.

Use the D0-D10 and A0 pins printed on the board the same as the pins on an arduino (given the 3.3v caution). The pinouts are below: 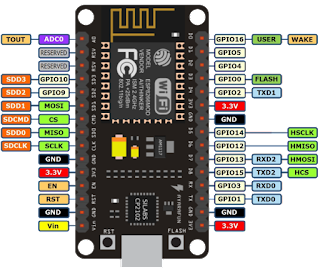 Since this article was posted, the prices are around $5 to $6 for a similar board – https://amzn.to/2WjAtb2

Updated Arduino Board definitions now list the LOLIN / WEMOS board, so you don't use the HUZZAH.