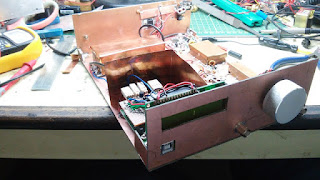 As a Ham, of course I want to be able to examine frequencies, and the strength of the signal on that frequency. So imagine my excitement when I found the following Arduino solution!

The Specan is actually a very simple but robustly built receiver. it is, in essence, a double conversion superhet receiver with 112 Mhz and 12 Mhz Intermediate frequencies. The first mixer uses an Si570 as the local oscillator. The second oscillator is a crystal controlled at 100 MHz; built with a common microprocessor crystal of 20 MHz. Unlike most radio receivers, the second IF has two filters : a narrow band crystal filter with 1 Khz bandwidth and a wide band LC filter with 300 Khz bandwidth. The detector converts the tuned signals into a log scale. The detector output is a decibel measure of the incoming signal.
The Specan is controlled with an Arduino board. The Arduino controls the Si570, handles the front panel, talks to the computer over the USB port, reads the detector and switches the filters. In a very simple usage, the Specan can be tuned around like a regular radio. Instead of listening to the signals, you read their strength on the LCD display.
You can switch between wide and narrow filters : using the wide filters to hunt for signals and then use the narrow filter to locate and measure them with greater precision. This in itself is quite a useful function. It is possible to measure intercepts, gains and harmonics without using a computer.
Under a PC’s control, the Specan can be made to step through any sequence of frequencies and plot them on the computer screen. The Specan understands a handful of text commands sent over the USB port of the Arduino.
The Specan also accomplishes a long standing personal goal – to make the homelab at VU2ESE entirely homebrew. The Specan can easily replace our aging TEK 465 scope and do even more.
This Specan can be built for far less than hundred dollars. Though it needs quite a few evenings of work. Construction is straightforward.You won’t need any special tools. Modules of the Specan are used to align the rest of it! The Specan serves as its own set of test and alignment gear!