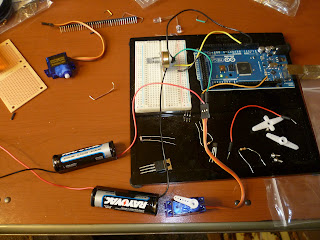 I recently received two HXT900 servos to play with. I used the sample servo code included in the Arduino IDE, that allows me to control the servo position with a potentiometer.

The pot is connected to the arduino, with the center wiper connected to Analog 0, and the outside connections to +5 and Gnd., respectively.

The servo initially gave us trouble, till Wild Bill on the Arduino.cc forum pointed out the servo needs it’s own power supply. The Arduino can’t provide enough power to operate it reliably, and could possibly damage the Arduino (thankfully it didn’t).

So, we connected the orange wire on the servo to Arduino pin 9, the servo red wire to the + of two AA batteries in series, and the servo brown wire, plus the AA battery pack negative, to Arduino ground. We then loaded the following sketch, and had instant success!

int potpin = 0;  // analog pin used to connect the potentiometer
int val;    // variable to read the value from the analog pin

It is likely that noise from the servo motors was being coupled back into the Arduino via the power supply. I've run two servos at a time from one Arduino, even two regular size servos, not just minis like you have.

In fact, at OlyMEGA we've built a bunch of little robots, each using two regular sized servos modified for continuous rotation for the wheels, so a lot more load than a free servo. We've run them powered from the Arduino's 5V power line, not a problem.

I strongly suspect the electronics inside your servos aren't bypassed at the power supply voltage, or maybe you originally had the wires from the servo passing too close to the wires from your potentiometer. Or a ground loop problem.